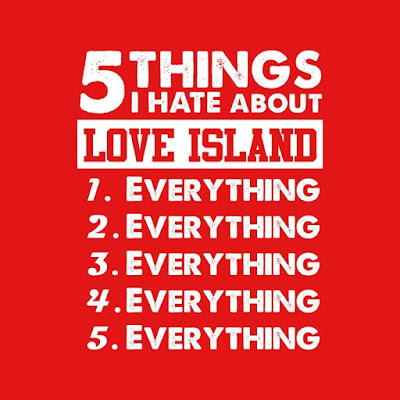 I know this will not be  popular  with a lot of the  British public, but I hate ITV1's  Love Island, there I have said it. Am I the only one?  I feel on a daily basis the only one.   Last Summer this show, about lovely young men and women on an holiday island  was on and all my  female friends and some of my  family were watching it, they were fascinated, next to the photocopier they were fascinated, going out for drinks with my girlfriends all I could hear was he fancies her she snogged him, so I felt like an absolute freak when I suddenly shouted to out "I have never seen it", all heads turned and looked at me in amazement, eyes wide and mouths open, one or two heads shaking in amazement, "what" one particular friend   cried out "never?".  They were horrified I felt like I wanted the ground to swallow me up whole.
So I must confess that night I went home put on Youtube typed in Love Island and there were lots of lots of older clips I saw one that would last around 20 minutes I will watch that I thought I can do twenty minutes,  myself and my eighteen year old niece who had come to stay decided to settle down and see what all the fuss was about. what I saw was a blindfolded  girl kiss each boy who were lined up waiting and give them scores out of ten, then the same the other way around were one blindfolded boy went along a line up of girls and kissed each one and gave them scores out of ten one girl got three out of ten, that would have given her loads of self esteem, I thought to myself what year are we living in again.  These individuals who are staying in this villa are supposed to be in their twenty's, Oh I am sorry I thought they were about 14.
They are all carbon copies of everything that is wrong with society  today and what the hell was a doctor doing on there and as I predicted none of the girls fancied him, he was far to intelligent for them, they did not understand anything he was talking about instead they all fancied the best looking beef cake. Funny that.
But what got me the most is they could not have put in a less diverse group of people not one ounce of fat on their  tanned toned bodies not one person with disabilities  or different body shapes. I was really bored. I related what I had seen to my friend on a later date and  she said " you're thinking far too much about it". Am I really! do I really want to watch a programme that teaches me nothing, could give people body image problems, and listen to them only going on about who they fancy when that is the only thing that should be on your young minds.  |I hope that the people who watch and enjoy the programme don't think to deeply about it and take it as entertainment and after the hour is over come back into the real world and live.
Reactions:

Sherley Altidor said…
I have never seen this show....but it sounds like the bachelor or bachelorette here in the states and shows like this does nothing for me. Never liked the meaning behind them.......so for lack of better words stupid....I could not participate in such thing. As they say "to each there own." Good honest article!
27 June 2019 at 03:25

Joy said…
it's not just you. i too find the show shallow and everything that's wrong with reality tv.

Unknown said…
Completely agree. I've never seen it either but friends have. I think it just eats into people's insecurity of the way they look. I think it's very dangerous.
29 June 2019 at 08:18