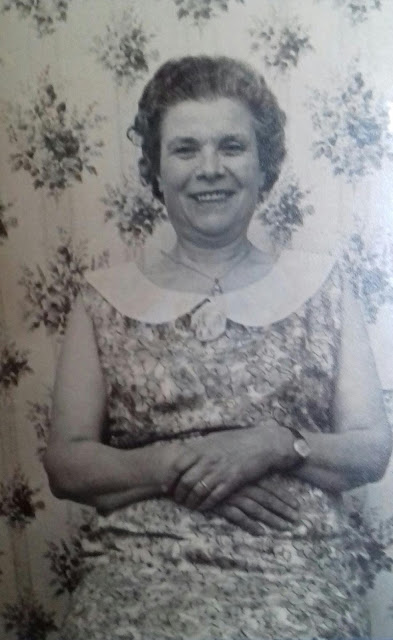 This is Anna, my Grandmother, and I have chosen her as my Inspirational women for International Women's day 2019.
Anna, my Grandmother was born in April 1907 on the East Coast of Italy, in another time, and another place, long before I was even thought of.  I have chosen my Grandmother today  because she was a strong confident women who had a hard life with no money no decent home and sometimes no shoes on her feet as she used to tell me.  My Grandmother got married at 18 in Pink and had four daughter's the youngest of whom was my own Mother.  My Grandfather was a farmer/soldier and when the second world war broke out my Grandfather was in the war, my Nan as I always called her, was on her own in war torn Italy with four daughter ages ranging from 13 downwards to 6 years old,  if we think of poverty in our towns and cities today according to my Nan's  standards they where horrendously poor only eating what they could grow and what they could kill.  During the war for the last three years of it my Granddad became a POW, Prisoner of war.
Because of extreme poverty of the region whatever my grandmother grew or the animals she raised people used to steal, stuff  knowing full well that she had four hungry girls to look after, they didn't care because their family were hungry too.  My Grandmother used to tell me stories of the Chickens she used to kill which used to fill me with horror and she used to remind me that food doesn't come in plastic containers, she was right of course.  After the war ended eventually my Granddad  went home to Italy, about two years later my Granddad, my Grandmother and my Mother and Aunts emigrated to the United Kingdom for a new life. I often wonder what must have been in her head when she left her home for good trying to build a new life and new home for her girls in a place that was so strange and not being able to speak any English at all it must have been nerve raking, but she did it to give her daughter's a better life.
My Nanny passed away in 1993 when I was 20, I look at pictures of her and try to remember all the stories that she told me, hoping to never forget them.
That  strength, that my Grandmother had has now  passed down to my Mother and her Sister's and hopefully on to me and my Sister and on to my Nieces and now on to my Great Niece. Four generations of women the youngest being only  two years old, who would never know my Nan, and hopefully one day I can tell her about her,  if it wasn't for her we would never be in the UK, I will also tell her  what a strong remarkable Women my Grandmother  was.

Who is your Inspirational Women?  I would love to hear your stories of them, may be feature them here on the blog, let me know if you would like to. e-mail me on, lorena_p2004@yahoo.co.uk

Other posts here on the blog, you might like to read Beautiful Day, and why we should empower people.     What did you want to be when you grew up?

Rebecca | The Diary of Rebecca said…
What an inspirational story :) My grandmother lived in London in the second world war, throughout the blitz. It was alrways interesting hearing her stories!
10 March 2019 at 20:07

Garden of Aquarius said…
What a wonderful memory of your Nan. Memories are those priceless family heirlooms that we keep passing down. Beautiful.
16 March 2019 at 18:20